From Brazilian hip-hop to the social commentary of a Chilean MC, the London Latin Music Festival served up a strong variety to thrilled crowds

London has a vigorous Latin American side to the capital, especially south of the river. But venues in Shoreditch and the Barbican were the hotspots for the 15th London Latin Music Festival. The talent ranged from the Equatoguinean singer Buika, to Uruguay’s Academy Award-winning songwriter Jorge Drexler to the Mexican flautist Alejandro Escuer and guitarist Morgan Szymanski.

Source: Emicida
On 24 April the Brazilian MC Emicida played at Rich Mix, in Shoreditch, to a sweaty crowd of buoyant Brazilians. He wore sunglasses for most of the performance and the only adornment to his baggy grey t-shirt was a green, yellow and blue national flag, grabbed from someone in the front row. He sauntered on stage to a roar from the floor and plunged straight into his repertoire, aided in some of the rap sections by his band members. There was a good feeling in the crowd, as punters paused between numbers to refresh themselves with lager in plastic glasses. 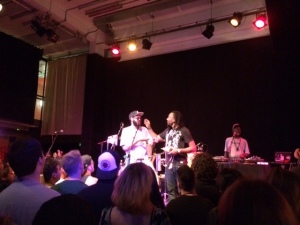 The sunny morning beats of ‘Levanta e Anda’ stretched through the jumping pack, with its laid-back under-rhythms and old-school R&B-tinged chords. The rapper from São Paulo played ‘Zica, Vai Lá’ (see below for video) in full early on, gearing the hordes up for what would become a staple throughout the show. The song tumbles straight into its chorus from the off, its steady accumulation giving the audience ample opportunity to shout along. 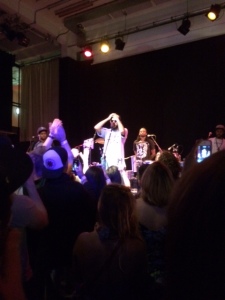 He returned to ‘Zica..’ – which is one of his most well-known songs – later on, giving the baying, dancing crowd the chance to belt out one of their favourites themselves, as he stood off, acting up. At the end, quick queues formed as the hip-hop artist agreed to sign copies of his latest CD at a table set up at the back of the hall.
Source: Emicida
A sold-out Rich Mix went wild again on 30 April for French-Chilean MC Ana Tijoux. From the moment she jumped up to join her ensemble the hall was captivated, with her borderless rap-rock reverberating around the joyous bunch. 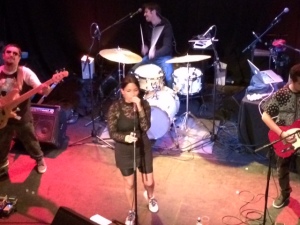 Wearing black cycling shorts under a lace bodycon dress, she bounced happily in her white trainers, rapping out her numbers thick and fast, and crooning slowly where choruses demanded.
Source: Nacional Records
Her well-known ‘1977’ was accompanied by a mad echo from the packed mass in front of the stage and the galleries above. Those sweaty bodies were moved to ska-jive in the pit by the funk notes of ‘Los Peces Gordos No Pueden Volar’.

She paused for a notable interlude early on to explain her politics; how she sang for the masses as she saw them: an interconnected world free from national boundaries and patriotic sabre-rattling. She stood up for the lowly and denounced capitalist colonisers.

‘Shock’ was adopted by students in her homeland in 2012 as part of their demonstrations for education reforms since promised by the new socialist government in Santiago. Although the video is focused on the protests and dozens of the student activists, Ana makes a brief appearance, holding a sign showing her support for the demonstrations.

In her London show, the vibrancy of her beliefs coming through her music resulted in a firm message underlining the dancing and mirth.

The political drive reached its zenith in the mad ‘Somos Sur’, a punchy concoction of international support for the “quietened, omitted, invisible”. The Dominican Republic, Algeria and Tanzania are all among a selection of Latin American, North African and sub-Saharan African countries celebrated with Tijoux’s power Spanish overlaying stylised Arab wails.

This leads into the Arabic attack rap section of the song from Shadia Mansour, introduced as a ‘sister’ to Tijoux. The British-Palestinian MC lays down her message enthusiastically, rapping in a colourful full-length gown.