Jay Kaes, Thierry Noir, Stik. Caravaggio, Hockney, Bosch. When it comes to artists, there are those that are world-famous and others who are less well-known. No doubt more people have heard of the second trio above – I certainly had before a recent walking tour of East London’s top street-art destinations. 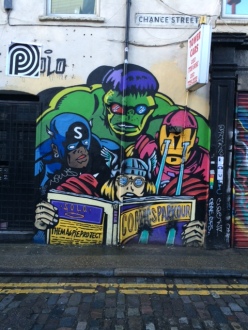 A piece by Italian artist SOLO in East London

There were two major distinctions within this branch of art that we had to understand: graffiti, which usually takes the form of hard-to-read tags carrying information of ownership, design and belonging; and street art, which offers more easily decipherable messages (at first glance) and may take the form of sculpture, installation or even painted chewing gum, rather than just simply a colourful mural.

There is another division between pieces: legal (and some of those are commissioned) or illegal. But here, as in other areas of street art and graffiti, you can find a blurring of the lines and varying interpretations. You may have an expansive piece painted on the side wall of a bar at the owner’s request (as we saw with a Jay Kaes work) that is legal and intricate. Then you see that it has been tagged with scribbly names by graffiti artists. At first glance, this is a legal work that has subsequently daubed with ruinous name-tags. An ‘illegal’ tag of a legal piece.

But what are the taggers saying? Hello? We don’t like this work? Or are they appreciating its quality and trying to cash in on the art-tourists, who, like us, will now also see the tag when we come to look at the original work? Are they suggesting that they would like to see something different in its place? The world of street art is transient and new pieces go up, are overhauled and challenged regularly. The fact that there were graffiti tags on this legal piece of wild-style street art shows that there are layers to the attitudes surrounding street art that cannot be easily categorised.

A piece by Colombian artist Stinkfish in East London

Of course, as in classic art, there are also layers to the lives of the artists themselves.

One of the major pieces we saw was near Old Street station by an artist called Tizer. He is an Australian who went through problems in his childhood and had found strength in his new family of fellow artists.

A riot of colour, his work often takes the form of his name creating another shape or design simply through the font and size of the letters. The Old Street work was the letters TIZER forming the chassis of a spacecraft that had a human inside, lending it an air of a self-portrait.

It was a fascinating lesson of learning to move through other streets in this area of London and see Conor Harrington’s blurred monochrome people, Invader’s pixellation-style video game creatures and Kai’s grey-framed political messages glued onto walls.

A piece by Thierry Noir

We did not meet any of the artists on that walkabout and we did not expect to do so.

The following day I travelled back to Wokingham, the town where my parents work, about 35 miles outside London. There is a long stretch of hoarding near a roundabout not far from the railway station that the council had put in place around a now-demolished building.

Over the last couple of years, at organised ‘Paint Jams’, the wooden boards have played host to a multitude of artworks by many local painters, with a mix of wild-style, graffiti and political cartoons. 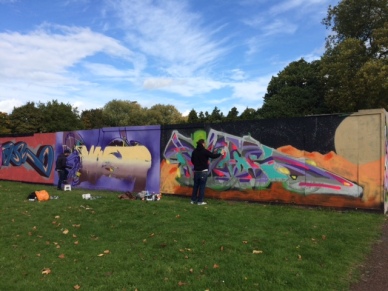 Tizer working on a new design in Wokingham

I was walking past this hoarding the day after the street-art tour and came across two artists working on new designs. One of them was creating something very like the piece I had seen yesterday by Tizer. I wandered over and spoke to him. An Aussie accent purred back: “Yeah, that’s me. I’m Tizer.” 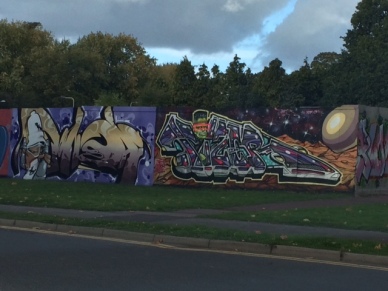 The finished Tizer piece in Wokingham

It was a ludicrous coincidence to learn about him and his work in London on one day and then the very next day see him spraying a new piece live in a little commuter town in middle-class Berkshire. He had never been to Wokingham before but had heard about the Paint Jam and had been shown the hoardings by his friend Bonzai, who was also there working that day. I listed all the names I could remember from yesterday, most of whom he knew and some of whom, like Spaniard Jay Kaes, were actually part of his crew.

What also struck me was that, for the most part, these artists are not angry teenagers trying to deface public buildings for no particular reason. These are grown women and men, like Bonzai and Tizer, working in the art world. They do not have the luxury backing of a commission from a gallery but theirs is a genre borne of the rain and the sunshine. It is here that they are engaging with people and the architecture that we create: designing intricate works of art; colourful, cryptic messages; and wild explosions of deep light. They are glueing, draping and tying and they are working for a meagre living.

These works of art breathe life into forgotten walls, alleys and corners. And while they may not always be legal pieces, they are always thought-through, and there is sizeable effort and creation behind them that cannot and ought not to be belittled and criticised as readily as others laud and salute those branches of the visual arts that are seen as historically as being more traditional.