An Atlantic archipelago is making waves among small, African nations

Cape Verde calls holiday-makers to its pristine beaches, adventurers to its active volcano and scientists to study its unique ecosystems and endemic wildlife. 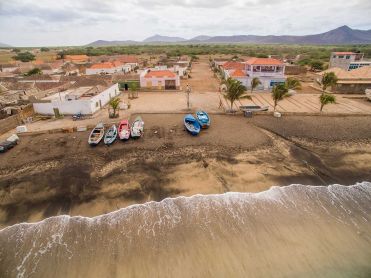 Off the west coast of Africa, more than 500km out into the Atlantic Ocean, Cape Verde has a deep and speckled history and is hoping for a bright future.

The islands’ geographical isolation from the mainland means that they have not been tainted by the political thrills and spills in other West African countries.

It enjoys a relatively stable democracy, with peaceful transfers of power between different parties at free elections. There has not been one coup d’état since independence in 1975.

Its unique location in the Atlantic between Africa and South America first saw the Portuguese establish a slave-trading exchange between Brazil and Lisbon’s western African colonies.

Then the American whaling ships swung by on their way to the hunting grounds to pick up supplies and young men looking for a life at sea away from the volcanic rocks. After that saw the construction of coal stations built by the British for cross-ocean steamers.

The islands have a population of 520,000 but thousands more claim Cape Verdean heritage in a well-established diaspora built upon the sea-faring traditions and international connections of the islanders.

To that end, remittances from overseas nationals provide a substantial boost to the economy, though tourism is easily the biggest source of income. Thousands of visitors come each year to while away hours on the white-sand beaches of the eastern islands, get lost in the canyons in the north, or take in the active volcanic island of Fogo.

And it is on that island that wine is famously produced on the lava of the islands’ highest point, Pico de Fogo. Aside from that though, the agriculture sector has been hard to develop on the windswept rocky islands. Some fruits are grown – but about 90% of food is imported.

Life expectancy of approximately 73.5 years is the highest in sub-Saharan Africa and the literacy rate is around 87%.

The World Bank sees the next steps for the archipelago’s economy as being to diversify ‘within and beyond’ the tourism sector, building a more flexible labour market and refining the investment climate. Additionally, there are hopes of improvements to the infrastructure links between the islands (some are just a few kilometres on a ferry apart; others are an hour’s flight away).

Morna, the melancholic genre of lilting music whose most famous exponent was Cesaria Evora, has been a major cultural export success. Indeed, music is part of the national DNA from the gyrating passion of the batuko to the anti-imperialist beat-surge of the funana.

All this reaches its climax in the run-up to Lent (this year just around the corner from 10-14 February) with the Cape Verde Carnival, when the islands will sway and stomp to a riot of kaleidoscopic dancers, floats and bands with a party to rival any that their Brazilian friends across the ocean could offer.

This blog will report from Cape Verde next month