The Partido Popular has won a huge majority in the 2011 Spanish general election. This blog is live in Madrid covering the result and its consequences. For regular updates follow @cullennews on Twitter

It was a record-breaking night. The conservatives have won their biggest ever majority, pounding the ruling Partido Socialista Obrero Español (PSOE) in the Spanish lower house by 186 seats to 110, and leaving the centre-left party in their worst ever position. The PP won all but seven of the 50 provinces and increased their majority in the upper house as well, where they now have 136 of the 208 senators.

“I am proud, happy and satisfied. We are facing a decisive time in Spain…but we will be part of the [eurozone crisis] solution, not the problem”

The reaction outside the PP’s headquarters just off Plaza Colón to Mariano Rajoy’s victory words was euphoric. Huge speakers were blasting out something musical for everyone, from Barry White to Frank Sinatra via the latest European club tunes. Hundreds of people crammed in along the street in a strange family-disco atmosphere; infants danced around pushchairs alongside teenagers clutching cans of lager. I was struck by the youthful nature of the crowd, with a large number of children and twenty-somethings showing their proud political colours on a night of joy for the right and desperation for the socialists.

The PSOE central office was a picture of dejection. There was no need for the street to be cordoned off, with about 30 people shuffling around on the pavement. Defeated candidate Arturo Pérez Rubalcaba accepted the result about 90 minutes after polls closed and has said his party will work with the government to try to deal with the economic crisis. According to a communications expert I spoke to, PSOE votes went two ways. Firstly, and unsurprisingly, floating voters plumped for the PP. Secondly, huge numbers of regular socialist supporters went further to the west and voted for the IU (Izquierda Unida, United Left).

Either way, there can be no mistake: the PSOE has been soundly beaten. Mr Rajoy urged his flag-waving supporters to party last night but to be ready for work today. (One wonders if Angela Merkel has put the champagne and beer on her ever-generous continental tab.) Yesterday’s grey drizzle has turned into a bright and warm autumn day but dark times are ahead.

Despite the crushing victory the conservatives have far from convinced the entire country: 312,000 ballot papers were spoiled; 322,000 were left unfilled; and nine million people – a quarter of the nation – did not vote at all. Spaniards will have to work together and be ready to compromise with Europe to confront the rocketing unemployment, rising borrowing costs and budget deficit. A trabajar.

Tomorrow, on Sunday, 20 November, Spain will hold a general election. This blog is live in Madrid covering the build-up and the vote itself. For regular updates throughout the weekend, follow @cullennews on Twitter

Today has been the dia de reflexión which traditionally precedes elections. It is a campaign-free day on which to consider your coming democratic decision. So what have Spaniards been thinking about?

The economic situation and high unemployment are the top two items on the list. Arturo Pérez Rubalcaba, the PSOE leader, wants to grow the economy before thinking about imposing any cuts. Mariano Rajoy, his PP counterpart, has not been clear about his economic plans but the undercurrent of gossip is that the conservative austerity axe is coming.

Mr Rajoy must explain how Spain is supposedly going to be different: under the present circumstances pessimism understandably persists. Mr Pérez Rubalcaba likes to point out that Portugal and the UK both recently replaced socialist governments with conservatives who, he says, have only exacerbated their crises with poorly defined and wounding austerity measures. Either way, Spaniards have probably had enough of talking about banks, cuts and bailouts and now want some action.

Also on the list to think about tonight is the widely appreciated belief that Spain could have been different. A photographer from Madrid, a Galician man who works in sales for a multi-national company and writer from Barcelona I spoke to today all exemplified the anger and sense of hopelessness amongst the young and the indignado movement.

However much Rajoy believes he can build a better Spain different from the PSOE-governed country he may inherit, many of the people he needs to inspire to help the economy to grow and the jobs to be created are fed up with the two-party pendulum. They have placed some hope in the new party Equo, which advances many of the same ideas and ambitions of the indignado movement. Equo has set its sights on about five seats (no threat to the pendulum) but the age and spread of voters will be of interest. The latest unemployment rate for 16-24 year-olds is shocking: 45.8% of the age group do not have a job.

The PP may be returned to the legislature from the comfort of the regular right and the floating voters of the middle-class. Rajoy must pay attention if the key to Spain’s unknown future, the young, do not vote for him, do not vote at all or vote, for example, for Equo. The fracturing of the youth vote will stop the possibility of a mass change driven by twenty-somethings’ ballot papers. But they are the people with whom the PSOE has started to lose touch. Spain’s new government, whoever it is, must not consider them a lost cause drifting away.

There is, indeed, much for the public to consider this evening. But the Spaniards who must have their thinking caps set tightest on their heads must be the uncertain politicians.

On Sunday, 20 November Spain will hold a general election. This blog is live in Madrid covering the build-up and the vote itself. For regular updates throughout the weekend, follow @cullennews on Twitter

Depende, depende (It depends, it depends)

It has been pleasantly mild in Madrid today and the same could be said for the campaigns of the two major parties in Spain, the conservative opposition PP (Popular Party) and the socialist party in government, the PSOE (Spanish Socialist Workers’ Party). With one full day left until the Spaniards follow their Iberian neighbours the Portuguese and head off to the ballot boxes for a eurozone crisis general election the mood in town seems calm; almost resigned.

This has been an ambulatory run-up to the election. There has been no bloody battle between the parties, just consistent criticism from the sidelines. They have been warming up for a match for months but have yet to take the field. And it seems that Arturo Pérez Rubalcaba (@conRubalcaba), the PSOE’s potential next prime minister, is privately accepting of the defeat. He has spent the whole campaign electioneering without a chosen finance minister and has resorted to psychological electioneering:

That is: do not vote us out of power totally or Spain’s democratic principles will be at risk. Not that PP leader and the probable new presidente del gobierno on Sunday, Mariano Rajoy (@marianorajoy), has been any more clear with his policies. He has infamously replied “depende” (it depends) when the elephant in the room, namely, the economy and austerity measures, has been raised. The leading newspaper El País today stated that Rajoy’s main objective for this campaign has been:

(To get to Sunday’s election without announcing a single unpopular policy. Without annoying anyone. Hiding)

Maybe all this sighing and dragging of feet is because both men know that whoever wins on Sunday will have to face a financial nightmare. Perhaps Pérez Rubalcaba has not appointed a finance minister because nobody wants the job. Perhaps Rajoy has been hiding because he himself knows that, if he wins, he will certainly have to announce some unpopular belt-tightening measures.

On 20 November Spain will hold a general election. This blog will cover it live from Madrid. This is the third preview post on this mid-economic crisis European election. (For the first build-up article, click here, and for the second, click here)

The people are ready to have their say once more. Portugal and Ireland have already voted but the two most recent electoral changes, in Italy and Greece, were undemocratic appointments of ‘national-unity’, technocratic governments.

A detailed poll earlier in the month by the national Centre for Sociological Research predicted the Spanish conservatives winning 190-195 seats, with about 46% of the vote. The party in government, the Partido Socialista Obrero Español (Spanish Socialist Workers’ Party, PSOE), has accused the Partido Popular (Popular Party, PP) of triumphalism. The poll forecast 116-121 seats for the PSOE (about 29% of the vote). They and their prime ministerial candidate, Alfredo Pérez Rubalcaba, know they are on the back foot and have chosen the election slogan:

“Pelea por lo que quieres” (Fight for what you want)

But should the PP and their leader, Mariano Rajoy, win, they will face the difficulties of trying to implement untasty austerity measures and any celebration at a possible landslide victory will be tempered pretty quickly by looking at the state of the country they would now head.

One in nine households has nobody working and the October unemployment figures showed 4.3m people out-of-work, the worst results for the months for 15 years. Spain’s borrowing rates are edging towards the Irish and Greek default limit. Speaking to young Madrid residents there was a sense of anxiety over what Mr Rajoy might do to Spain should his party win the 180 seats necessary for an absolute majority on Sunday. One Galician girl told me:

“I don’t like Zapatero [the outgoing PSOE prime minister] but Rajoy scares me”.

It seems that the winner’s hands will be tied for a good while by the constraints of the eurozone crisis. The PP have told us to: 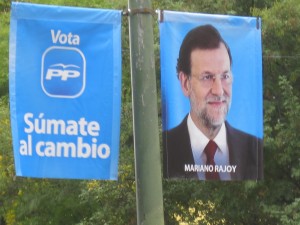 but with the single currency’s woes far from over, weak economic growth forecasts and austerity measures on the menu, the return to power for the PP after seven years in opposition will be announced not with champagne, but with strict sips from a poisoned chalice.

For live updates throughout the election weekend from Madrid: @cullennews